For a writer taking criticism of your work is part of the job but it’s difficult not to be devastated by some of the things editors say – or don’t say. When I do critiques for aspiring writers I’m very conscious of this. I try to couch my opinion in a gentle way but that can mean I’m not being honest or clear, so now instead of beating around the bush I preface with some advice on how to approach feedback:

This is probably the first critique of your work you have ever received so you should know that ALL writers (no matter how long they’ve been writing) tend to hone in immediately on the negative remarks in critiques and ignore the positive; I know I do. Having your work critiqued can feel a little like being flattened by a steamroller! Read on, but remember good writing is all about teasing out what’s working and what isn’t, and then rewriting/editing with that in mind. Whether it’s song lyrics, poetry or prose, no one writes perfect ready-to-publish pieces straight from their head onto the page.  All ‘mistakes’ are there to be learnt from and are the typical mistakes everyone makes when starting out. If you pick up any of the books on writing I recommend you’ll see they all cover the same ground over and over again. Writing is a craft as well as an art and this critique is about helping you develop the craft. Most writers write, rewrite, rewrite and rewrite again. First drafts are just that – drafts. When I critique work I intend everything to be taken positively. Everything is about going forward to the next stage.

Then comes the critique.  At the end I add some advice on how to recover from it:

Picking yourself up after a crit of your work –

Having your work critiqued can be overwhelming and feel very negative. This is how I respond to having my work pulled apart by editors. 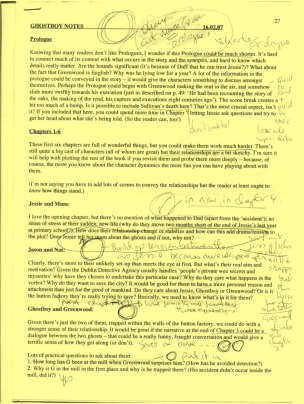 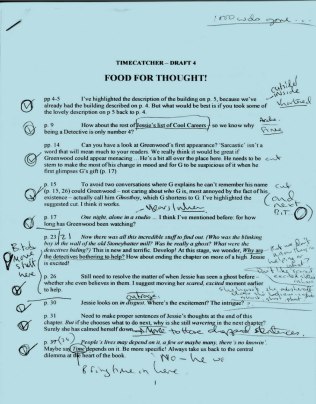 The yellow image above is one of four pages of feedback from my editor on the first draft of the opening six chapters of my first novel. The blue image is the first page of feedback on draft number four. Note that this sheet only covers the problems on pages 1-37! The scribbles are my reactions to the notes. I was lucky to have a fine editor holding my hand through the process of writing Timecatcher and I learnt a huge amount about the writing craft from him.

To the students of Marino Institute of Education: Three brave Marino students have already sent me work to critique and I enjoyed reading their manuscripts very much. I hope my feedback was useful and they had cake to hand when reading it. I’m up for critiquing three more pieces, so if you are a secret writer or illustrator send me one chapter or some images or a handful of poems or a short story or a picture book idea, but get them to Ciara Ní Bhroin ASAP as it will be on a first come, first served basis.

This is my third year as writer-in-residence at Marino Institute of Education. (MIE) is an associated college of Trinity College, Dublin, the University of Dublin. MIE offers courses across the continuum of teacher education and prepares specialist education practitioners at early years, primary and further education levels.

Finishing a book can turn into a cascade of endings. I’ve been ‘finishing’ Owl Bat Bat Owl for months. All the main interior art was ‘done’ before we headed to the USA for Thanksgiving, but that still left the title page, endpapers and cover, so I set to REALLY finishing it when I came back.

Then came the tweaks and corrections. Bits and pieces which my editors had spotted – these post-its adorned the print-out of the art they sent me. I peeled them off as I fixed them… 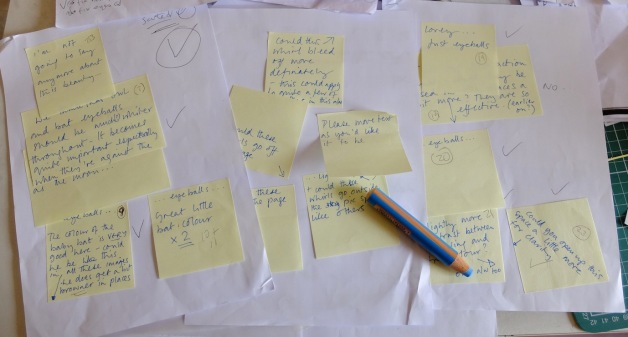 But there was even more fickity feckity stuff I spotted myself. And stuff Michael pointed out – it often takes a fresh eye to notice things this late in the game. So many things to sort that I had to list them image by image, then go through methodically and tick them off as done. 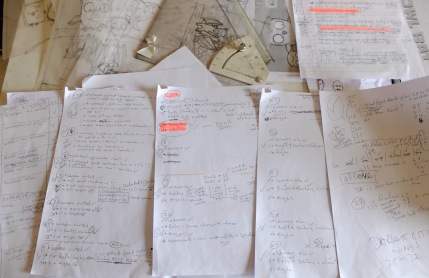 Tweaks and fixes image by image

Tweaks to the tweaks…

This is my first time illustrating a book digitally and I found it involves way more tweaking than usual. With physical art there is a point at which tweaking could destroy the piece so you have to just let it be – with digital you can go on messing indefinitely.

So there were tweaks to the tweaks… some from the editors and some more of my own. I felt as if my head and shoulders were actually inside the computer and my depth of focus was permanently reduced to two feet. I was vacillating between ‘I hate this book, I don’t care what it looks like’ and ‘steady…steady…not long now…one more push and it will all be over…’

There have been books where ‘I don’t care’ won the day so I’ve got to live with those flaws I was too tired to fix. This time ‘steady, steady’ won – I even pulled the cover back from my art editor for more tweaks (one for Michael, two for me) after she’d already given it the thumbs up. But the thing is there will always be flaws, stuff which could have been better. You could go on fixing and polishing indefinitely – how do you know when to STOP?

Usually it’s the publishing schedule that dictates when you have to let go at last but the problem with all that final polishing is you risk your art losing vital energy, spontaneity, freshness, so at some point IT HAS TO END. It’s the same with a novel. In theory you can keep reworking; in reality (in my opinion) books can die from overworking. You’ve got to abandon* this book and take what you’ve learnt onto the next one. When I finally put the memory stick of files in the post I was at the stage where I could no longer see the images as images, the characters as characters – they had become just so many pixels. I was way beyond doing positive work on it so it was time to let it go.

And then, having already downed my celebratory whiskey, an image bounced back with some comments I couldn’t ignore because I agreed with them… grrr! Three days later…

Until, that is, the proofs arrive…

*A poem is never finished, only abandoned. Paul Valery