Narnia, Game of Thrones, Cúchulainn, Finn MacCool – Northern Ireland is full of story. We went chasing tales in Antrim, Down and Armagh last week with our two visitors from Kansas. Sally and Clyde Cowdin are a sister and brother who grew up in a children’s book shop – Reading Reptile in Kansas City.

We started our ‘book’ tour with Narnia and C S Lewis. Lewis hailed from Belfast and Dunluce Castle is thought to be the inspiration for Cair Paravel in The Lion, the Witch and the Wardrobe. It also features as the House of Greyjoy in HBO’s Game of Thrones. 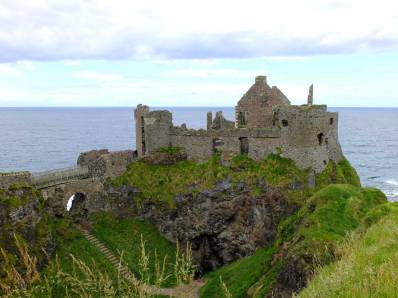 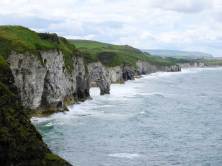 A lot of Game of Thrones (based on A Song of Fire and Ice series, George R.R. Martin) is filmed in NI, using the dramatic mountains and coast as the settings in Westeros – Winterfell, Stormlands, the Iron Islands (disclaimer: I don’t really know what I’m talking about here; we rarely watch it). I googled and found a do-it-yourself driving tour. All the photos below are locations – the Dark Hedges (part of the Kingsroad in GoT), Ballintoy Harbour (Lordsport Harbour/the Iron Islands), and the Carrick-a Rede Rope Bridge on Larrybane Head, which doubles as Storm’s End. I didn’t brave the famous bridge as I’m a wee bit acrophobic and it’s a 23 metre drop. Instead I chatted to the gate-keeper, who said numbers had doubled in one year.

(Roll over/click on any of the photos for details/ to navigate.) 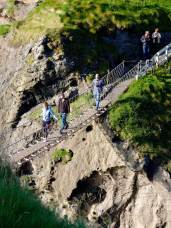 Michael, Clyde and Sally cross Carrick-A-Rede rope bridge which most of the cast of GoT have apparently braved at some stage. 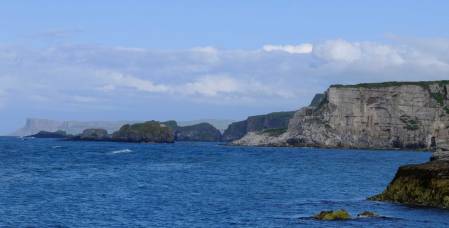 View from Ballintoy of Larrybane Head -Storms End in the show. 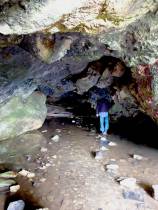 The atmospheric Dark Hedges, scene of Arya Stark’s escape along the Kingsroad. The avenue of beech trees was planted in the 18th century

Ballintoy Harbour in real life and in the show: 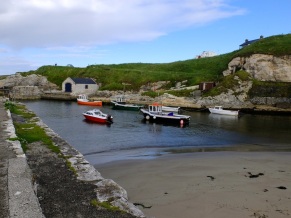 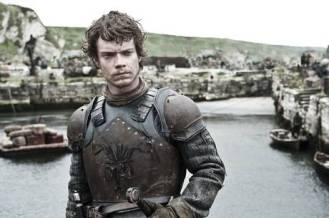 Next we entered Irish legend territory – the astonishing Giant’s Causeway. The tales say it was created by Finn MacCool (Fionn McCumhaill ) so he could get closer to Scotland and call out the Scottish giant, Benandonner, to come fight him. Unfortunately the Scottish giant turned out to be a lot bigger than Finn, but Finn’s clever wife quickly dressed Finn up as a baby. Benandonner figured that if the baby was this huge then his daddy, Finn, must be enormous, and he ran home across the causeway, tearing it up as he went.

Michael amongst the basalt columns

look for the pipes and the giants’ red eye sockets… well, one and a half eye sockets.

Scotland! The blue behind Rathlin Island is the Mull of Kintyre. Yep, now you’ll be humming it all day…

The bold Finn pulled up a sod of earth to throw after him. The hole filled with water and became Lough Neagh (also on our tour), and the sod landed in the sea and became the Isle of Man.  (Full version of legend here)

And this is the Ring of Gullion. No better way to end our story trail with the Reading Reptiles than with the greatest hero of Irish story – Cúchulainn!

The Ring of Gullion – it’s a volcanic ring dyke, a ring of low hills around a mountain.

We’ve passed the sign for the Ring of Gullion several times in the last three years and thought it sounded a bit Tolkienesque. Turns out the ‘ring’ is a group of roundy hills which surround Slieve Gullion, Culann’s mountain, the very place where the boy Setanta killed Culann’s guard dog in self defence after he arrived late to Culann’s feast. Setanta then agreed to guard Culann’s property until he trained a new hound, thus earning himself the name Cúchulainn, the Hound of Culann.

Link to self-drive GoT tours here. There are loads of GoT tours online -self drive and guided.