Hello to the students and staff of Marino Institute of Education. Let me introduce myself. My name is Marie-Louise Fitzpatrick and I am your children’s writer-in-residence for 2017/18. I am a writer/illustrator and I’ve been making books for children since 1988. Here are some of my books:

I am I Roaring Brook, USA 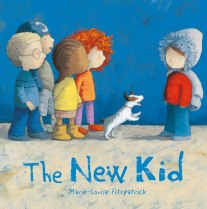 You, Me and the Big Blue Sea, Gullane, UK

I’m a Tiger Too, Gullane UK 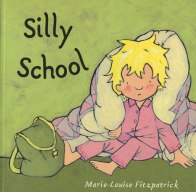 Since 2006 I’ve also been writing novels for older kids: 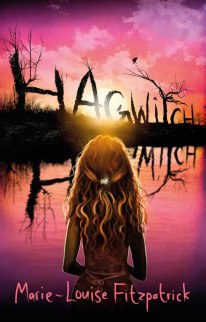 My main interest as a picturebook creator is in charting the personal journeys we make in early childhood, the small events which change us, the little battles and triumphs as we grow up. I’m told that Izzy and Skunk has been used with children by psychiatrists and There is used in classrooms to introduce kids to philosophy. My novels are rooted in myth and legend but ultimately they are concerned (as so many stories are) with how we each twist and turn and struggle (and laugh and dance) towards adulthood.

Over my career I’ve worked with Irish, UK and US publishers and my books are in many languages. The Sleeping Giant has been my Irish bestseller; Izzy and Skunk, I’m a Tiger Too and There are probably my most widely read worldwide. Izzy even made it into Farsi. There has been popular in Japan and I was privileged to have the poet and philosopher Shozo Kajima translate – and write an introduction to – the Japanese edition.

My work has won many awards, including four overall Bisto/CBI Book of the Year Awards and six honours. There was an Eric Carle Museum Best Picturebooks of 2009 choice and The Long March is a Smithsonian Notable Book. My most recent book, Owl Bat Bat Owl, has just been designated a Junior Library Guild Selection for Fall 2017 in the US. 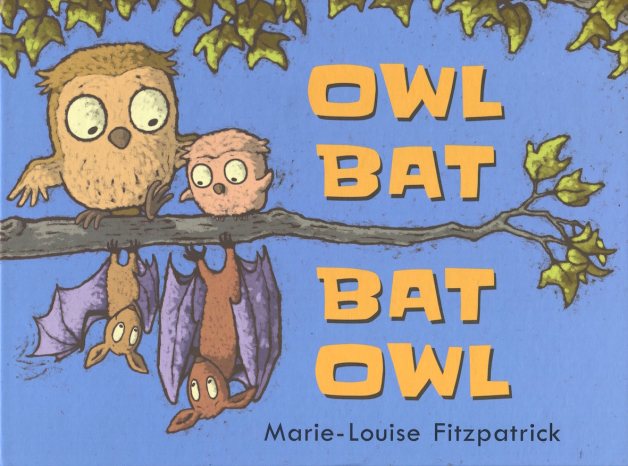 Owl Bat Bat Owl is a wordless picturebook and I look forward to sharing it with you. I’ll speak about where the idea came from and how it developed, and also about how wordless books work with children and how much they can learn from them. For those of you who’ve met me already and heard me speak about Owl Bat Bat Owl, I will be designing a new talk for you. Any suggestions? Let me know in the comments below!

I will also be writing a series of blogs during my residency especially directed towards you, student teachers in Marino. If you have any questions about my work, about one of my books, about children’s books in general, about writing and illustrating, please send them my way. You can contact me via Ciara Ní Bhroin. I’d love to hear from you.

Marino Institute of Education (MIE) is an associated college of Trinity College, Dublin, the University of Dublin. MIE offers courses across the continuum of teacher education and prepares specialist education practitioners at early years, primary and further education levels.  This is my third year as writer-in-residence.

Photo of me at work © Róisín White

The spark for my new picturebook Owl Bat Bat Owl came from this Christmas card Michael made for me: 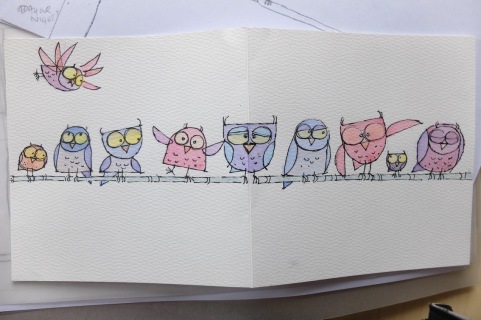 One day as I looked at it I thought, ‘bet it would really horrify those owls if another creature moved in on their branch,’ and the idea was born.

As soon as I began sketching my little owls and bats I realised I was riffing on a familiar theme, one I’d explored before in The Long March (1998) and also in I am I (2006), and I was directly referencing this Native American symbol I had come across when making The Long March:

For the Choctaw this is a river symbol*. Gary Whitedeer explained to me that the Choctaw say that just as you cannot stand on both banks of a river at once, you cannot belong to two cultures, but sometimes the river narrows, the banks come closer together and you can reach across and touch someone on the other side.

This idea really resonated with the story I was writing in The Long March.The Choctaw had been through the awful trauma of displacement, which had resulted in huge loss of life through hunger and disease. In 1847, the worst year of the Great Famine, they sent aid to Ireland, reaching across an ocean to help another people going through what they had experienced.

When I came up with the idea for I am I (2006) I quickly realised that I was referencing that river symbol again. The two boys in the story are divided by a river, each yelling about who owns their valley, each full of ego and pride and hate, but when they see the damage their words have done they ‘reach across’ to each other in empathy. 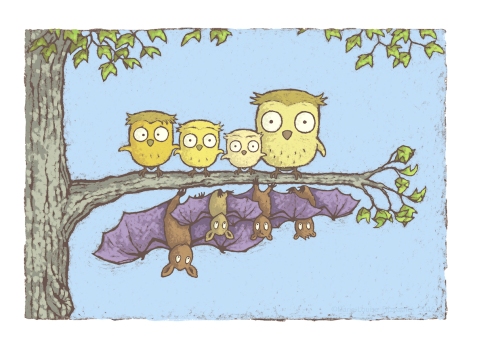 In Owl Bat Bat Owl the river is replaced by a branch. The resident owls are horrified when a family of homeless bats turn up seeking refuge in their tree, but then the wind blows up a storm and the two families experience near catastrophe…

I told the story of The Long March with several thousand words and detailed realistic illustrations. I only used a few hundred words in I am I but those words morphed and twisted into barbed wire, a dragon, birds, making it very much a story told visually. With Owl Bat Bat Owl I have dispensed with words completely and the whole story unfolds through images alone.

It is my first wordless book, my first all-animal book and the first time I’ve illustrated a book entirely with digital art, but for all its difference and newness it is indeed ‘the same old story’. I am writing again about displacement, difference, empathy, friendship. The river symbol which Gary Whitedeer showed me in 1996 has run through my work, gifting me story after story, or the same story reimagined. The three books look very different but that river runs through them all.

*some Native American tribes see this as a snake symbol.

We often use hot colours in illustrations to make something stand out. You know how it works – cool colours recede, warm colours jump forward. Think of Spielberg using the child in the red coat in his black and white film, Schindler’s List, or of paintings of pastoral scenes which use a red roof or a yellow dress to draw your eye.

Sometimes it’s great to really go for it and use loads of hot colours in one image, or even throughout a whole book. These are the colours of powerful emotions; I used them throughout I am I, which is a story about anger and violence. The  palette for it is based on photos I’d taken in Australia’s Red Centre, and Andalucia. Nature is definitely the best starting point for figuring out how to handle fizzing reds, clashing purples and fiery oranges, without ending up in a complete mess! 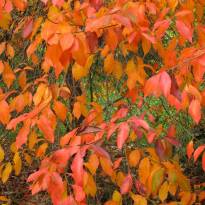 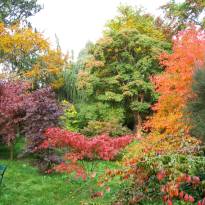 even the greens are zinging…

How fabulous is this red? 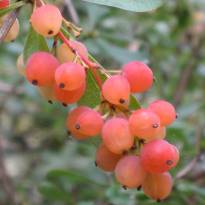 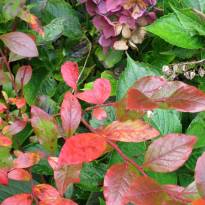 Yellow and purple, complementary colours on the colour wheel

These photos were all taken in Mount Usher gardens where the gardeners are masters of colour mixing. Click on them for full images.

Tuesday’s bouquet of colour will be from a… street car.